If you’re lucky enough to receive an iPhone or iPad as a gift this holiday season, or you simply want to while away hours of downtime while at a family gathering, remember that iOS has a lot of games available to play. Here are ten well-established games you really should look at and play.

The follow-up to “Alto’s Adventure,” the Apple Design Award-winning “Alto’s Odyssey” is an endless surfer, putting players against constantly changing scenery. Starting at the top, players control the character’s jumping ability, with the aim of getting as far down the mountain as possible in a single run.

Collectable tokens can be picked up each run, which can be exchanged for improved abilities in the workshop, such as increased invulnerability to rocks that may be in the way, or making the Coin Magnet power-up last for longer whenever it is activated. You’re not just limited to snowboarding on sand, as a wingsuit can be unlocked to reach new highs and to perform other aerial acrobatics away from the obstacle-strewn landscape.

To match its visual appeal, the game also includes a Photo mode where users can pause and take a screenshot of the scenery, while a Zen mode provides access to the mountain without the stress of scores or coin collection, all to a serene soundtrack.

“Alto’s Odyssey” is available on iPhone and iPad priced at $4.99.

One of Nintendo’s first full game launches on iOS, “Super Mario Run” is the platforming game practically everyone is familiar with, dragged into the mobile gaming age. Playing as the titular and extremely famous plumber Mario, you must traverse a series of levels, collecting coins and stomping on enemies as you go.

To make it more usable on the smaller iPhone screen, the game has been designed so it can be played with one finger or thumb. As Mario runs through the level, players have to carefully time and aim their jumps to keep Mario safe by avoiding an enemy or to reach the next platform.

Along with the 24 courses and nine-course special world after completing the main selection, the game also offers extra modes, including Remix 10, which combines a random selection of short courses together into a brief and action-packed experience. Toad Rally is the more conventional competitive mode, where you run against ghosts of other players to get through a level with the most coins.

The first four courses are free to play on both iPhone and iPad, with a $9.99 in-app purchase unlocking all worlds.

While seemingly not a seriously deep game, “Super Hexagon” from Distractionware earns its longevity by being an exceptionally hard game. Behind simplistic graphics and a deceptively easy to understand game lies addictive frustration.

The goal is simply to guide the triangle past the walls of the hexagon for as long as possible, all while the walls continue to creep closer to the center of the screen. As time moves on, the walls move faster, leaving little time to get the triangle to safety, with some difficulty levels ending a run within a few seconds of starting.

This is all done to a thumping soundtrack and hypnotic visuals that spin around the screen, making it harder to keep track of your position and your movement speed. Failure is also brief, as you can almost instantly return to the start of a level for a new run whenever you collide with a wall.

One of the best-known collectable card games for iPhone and iPad, “Hearthstone” is set in Blizzard’s “World of Warcraft.” Playing cards onto the board can summon minions and cast spells, which can attack your opponent or their creatures each turn.

By taking your opponent’s life down to zero, you win, so long as they don’t do the same to you first. This means players have to create and perfect their decks, tweaking the spells they will use in future games to increase their odds of winning.

While there is satisfaction in taking down your match-made real-world opponent, there’s also a collection of adventures set in the “Warcraft” universe, putting you against computer-controlled rivals with the possibility of unlocking new cards if you win. New stories and activities are offered throughout the year, giving an opportunity to play without dealing with other human players at all, or alternately more chances to earn more cards.

“Hearthstone” is free to play, and you can earn cards for free, but you can also purchase bundles of card packs from $2.99.

The Zach Gage iPhone and iPad game “TypeShift” is a word game with a difference. The aim is to use all of the letter tiles in all stacks at least once to form words of the same length, with each created by shifting each of the columns of letters up and down.

When a valid word is formed, all previously unused letter tiles are lit up, making it easy to see what letters have been used and which are yet to be employed in a word. As the game combines three to five source words in a scrambled stack, you can be efficient and pick up on just those words, but it is also valid to try out other semi-random letter combinations if you are stuck, or to simply knock off the few unused remaining tiles.

The game has a free daily challenge, with one a day offered until 2029, as well as over a hundred free puzzles immediately accessible. Like crosswords and sudoku puzzles in newspapers, the easiest daily puzzle is offered on a Monday and gradually increases in difficulty throughout the week, with players able to compare their fastest times to complete it against each other.

An indie puzzle game for iPhone, “Blackbox” tests your knowledge of how your iPhone works. Each puzzle on the map requires the player to perform some action with the iPhone to make the icon fill up, with the puzzle’s graphics offering some form of a clue. 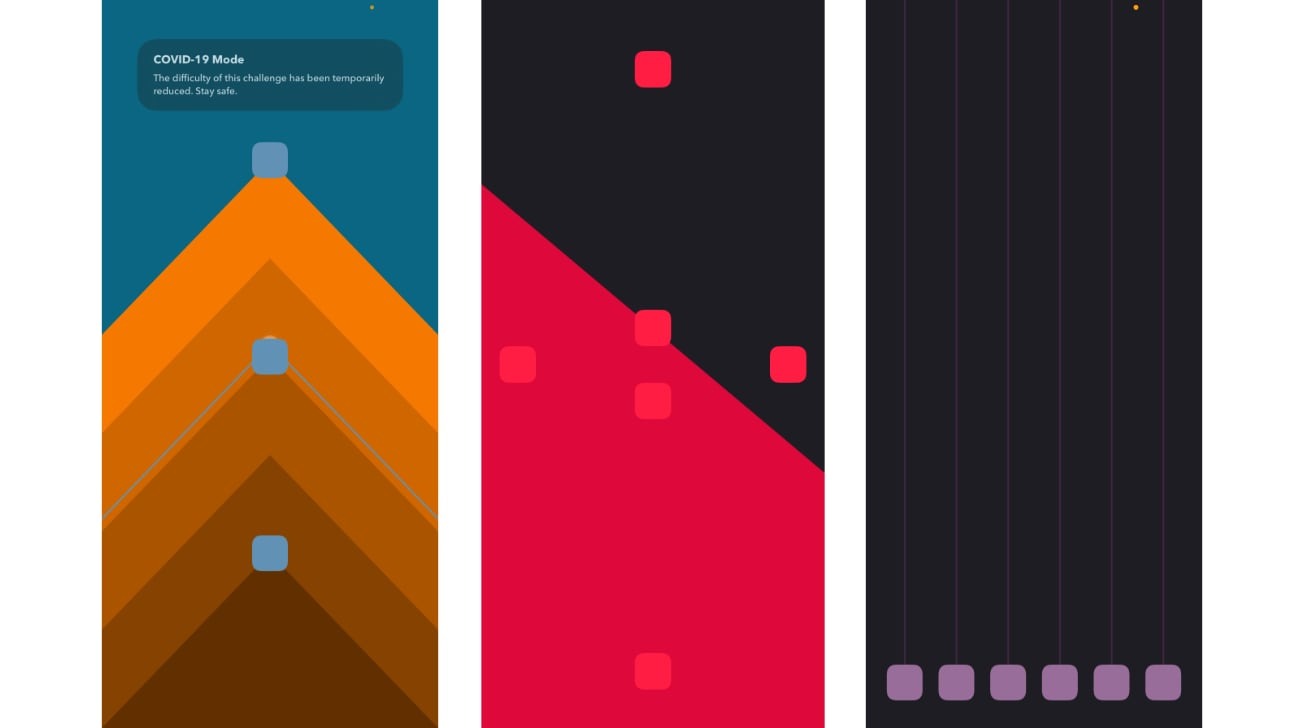 The catch is that none of the puzzles involve directly interacting with the app itself, nor touching the screen, as doing so brings you back to the puzzle map. Instead, you have to do something else to the iPhone to put it into a specific state.

Solutions could require you to make specific noises, to hold or tilt the iPhone in certain ways, take the iPhone on a walk, or even to explore the Settings and accessibility menus. The puzzle graphic will provide a hint of what to do, and possibly progress to the goal, but the rest is all about rediscovering what your iPhone can actually do.

The Apple Design Award winner is free to try, with hint packs and other extras available starting from $0.99.

If you need to have an excuse to go out for a walk or to encourage a younger user to do the same, consider “Pokemon Go.” The wildly popular creature collection and battling game from Nintendo’s game consoles is available on iPhone and iPad in a different form, one that takes the game global.

As well as walking to collect creatures in specific locations and environments, which can be done in an AR view, traveling can help unlock extra bonuses that can assist in battles. Player-on-player Gym Battles has players fighting to keep control of gyms in locations, ownership of which generates rewards, while Raids require trainers to team up with each other to take on legendary Pokemon.

There are more than 500 Pokemon available to collect, which means there’s a lot of ground to cover if you want to catch them all.

The base game is free, but you have to pay for in-game currency, starting from $0.99.

Combining the unlikely pairing of “Pac-Man” with “Crossy Road,” “Pac-Man 256” is an endless runner that borrows the core idea and gameplay of the classic arcade game.

As per usual “Pac-Man” gameplay, you move around a maze, eating dots and avoiding ghosts, while eating power pills makes the ghosts temporarily edible for a bonus. The 256 elements include the maze being extremely tall and randomly generated, with players constantly forced upwards by the ongoing march of the “Glitch” rising from the bottom of the screen.

Outrunning the Glitch and evading the ghosts is only part of the challenge, as other power-ups can be collected and mastered over time, while the dot-eating mechanic forces players to judge whether to risk the more dangerous path in favor of a higher score, or to go for safety and the longer distance.

Billed as the “original number slider,” the Apple Game of the Year-winning “Threes!” challenges players to manage an increasing pile of tiles in a grid. By pushing tiles of the same number together, the value of the tiles increases, raising the score of the round in the process.

The challenge comes in when there are fewer empty spaces for tiles to fit, as the board fills up with each move you make. Eventually, there are no matches to make, ending the game completely once all of the spaces are occupied.

Despite seeming complicated, the easy to understand gameplay is highly addictive and can be learned within a minute, leaving you to come up with new strategies to deal with higher-value tiles. Its excellent appearance also holds up years after its original release, proving it is possible to create an effectively timeless game in a time of mobile gaming.

“Threes!” is available on iPhone and iPad for $5.99, without any in-app purchases. A free version called “Threes! Freeplay” is also available with in-app advertising.

A BAFTA winner for Artistic Achievement, State of Play Games’ “Lumino City” is a charming point and click adventure set in a physically-animated world. The developers created a real-world set full of meticulous detail and filmed for the character’s journey.

Taking the role of Lumi, players have to search for her kidnapped grandfather, the caretaker of Lumino City. To do so, Lumi has to pass through the city, interacting with different mechanisms as she goes, changing the layout of the physical set.

The visually stunning game features stop motion animation, and a set produced from paper, card, miniature lights, and motors. While the bulk of the game is the story and puzzles, you can easily spend a lot of time playing around with other areas, as you explore the other elements and inspect the hard work of the model makers.

“Lumino City” is available for iPhone and iPad, and is priced at $4.99 with no further in-app payments.

New MacBook Pros are coming Oct. 18 and the design remains a mystery

AppleInsider is supported by its audience and may earn commission when you buy ...