Review: Backbone One turns your iPhone into a powerful handheld game console

The Backbone One combines slim and modern controller design with specialized software for a complete handheld gaming experience.

Modern mobile gamers may have grown accustomed to touchscreen controls, but nothing beats a physical controller. The Backbone One takes on a familiar form factor with some baked-in software that rounds out the console experience better than any iOS controller before it.

Many companies have tried to tackle iOS controller design, from mounting the iPhone in a bracket above the controller to merely using a stand and playing as if the iPhone were a small TV. Even the ill-fated Gamevice used a similar mounting system, but Backbone One perfects it.

When playing games on Apple devices, users can opt for many controllers— even the Playstation or Xbox controllers work across Apple’s platforms. Using traditional controllers on the iPhone can prove challenging or not optimized due to the small screen and lack of mounting options while playing.

The Backbone One controller addresses those issues and others.

While other controllers like Gamevice have seemingly cracked this problem, the controllers were bulky and were limited by Apple’s old controller APIs. Backbone One can take full advantage of the current controller configurations on iOS and adds some unique software on top. 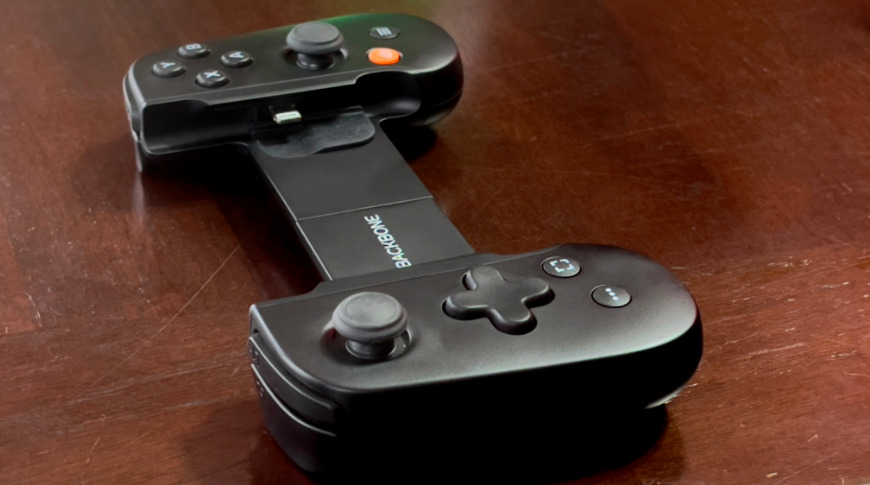 The Backbone One snaps onto your iPhone with a minimal design

The Backbone One consists of two controller sections connected by a “backbone” that can adjust to fit your iPhone’s size. Once attached, it takes on a look similar to a Nintendo Switch or Sony’s PSP.

The joysticks take on the Xbox styling with diagonal juxtaposition, and the buttons are clicky and responsive. Triggers depress easily and have a satisfying amount of travel.

The lightweight plastic makes the controller feel light in hand and doesn’t add much to your iPhone’s weight. The controller is bulky when attached, but not as massive as previous controllers like Gamevice.

The design of the backplate where the iPhone rests is rigid and slides to enable larger iPhone attachments. The controller easily extends to fit even the iPhone 12 Pro Max with some room to spare for future big iPhones, though you can’t use an iPhone inside a case. 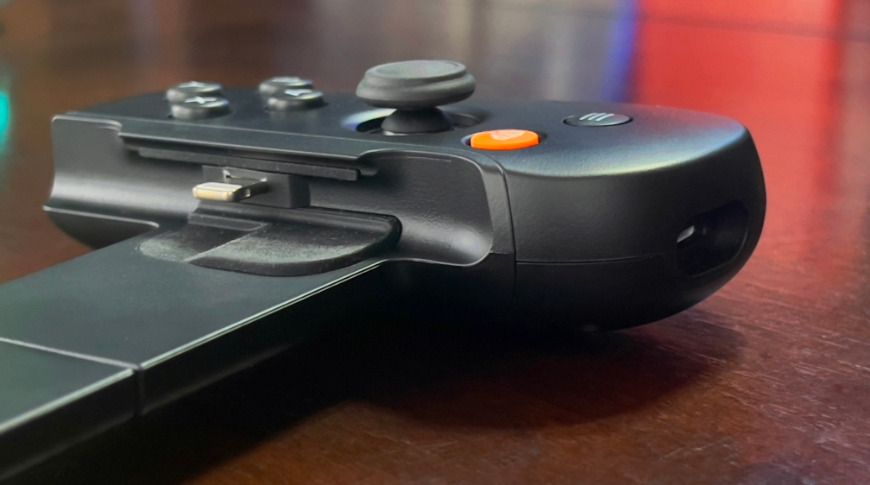 The Backbone One connects via Lightning

There are additional buttons that are mapped to system functions on the iPhone. These buttons are unique to Backbone One and help make the iPhone feel like a dedicated gaming device rather than just a controller.

The ellipsis button can mute your microphone when in voice chat. The square button starts a video recording when pressed once or takes a screenshot when held down.

The orange “Backbone” button opens the Backbone app from anywhere, even if you’re in a game. Lastly, the hamburger button opens in-game options menus, like a start or pause button on a console controller. 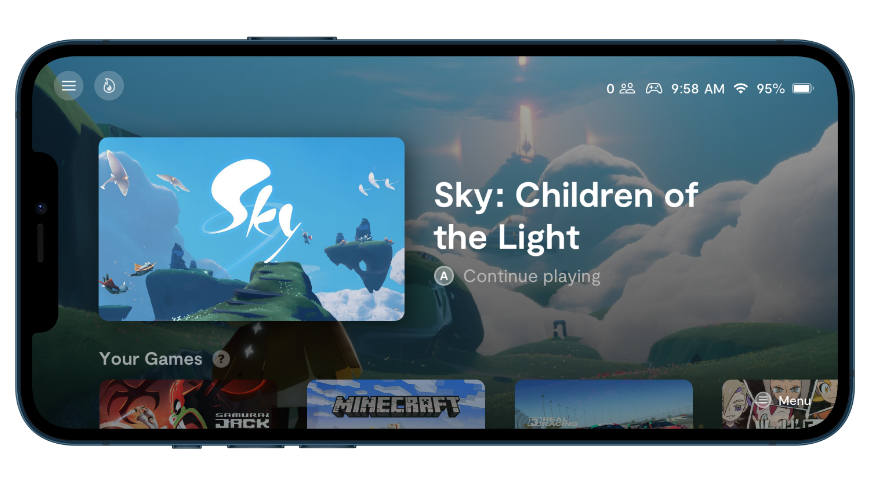 The game switching menu is the highlight of the Backbone app

The Backbone app is central to what makes the Backbone One transform the iPhone into a gaming console. Rather than navigate the iOS UI to switch games or operate social features, the Backbone button on the controller launches the app for easier game switching.

The app is not required for the controller to work, so you can still launch a game and start playing normally if you want. Otherwise, the app acts as a home screen to your controller-compatible games.

The Backbone app wants to be the center of the experience by giving users a social account for connecting to other Backbone users.

This, of course, limits who you can play with while using the app, given it uses a proprietary account rather than Game Center or Xbox Live. Even if a friend downloads the app to use the chat features, it won’t launch without connecting a Backbone controller for the first time. 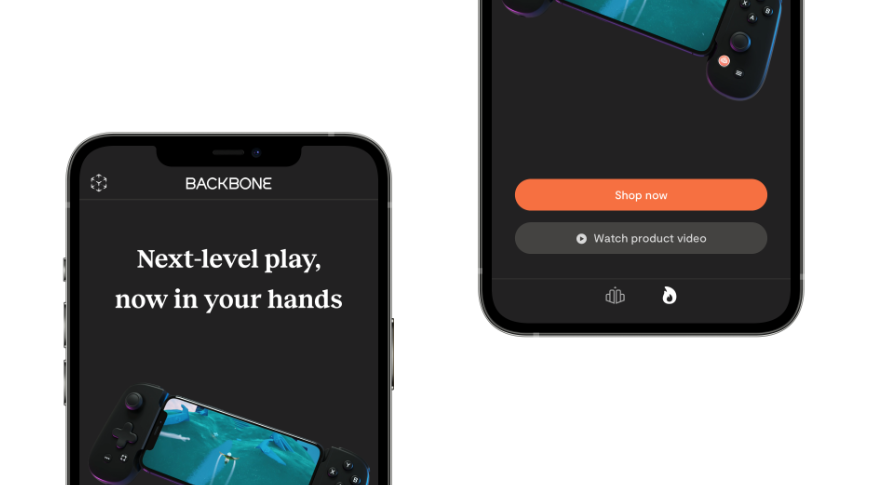 You cannot get past this screen without a Backbone One connected

If you and a group of friends all invest in the expensive controller, you’ll be able to take full advantage of the app experience. The decision to lock features behind a physical purchase is not a good one and is the primary detriment of this product.

Beyond the walled-garden social features, the app works as an excellent game launcher and screenshot/video management platform. However, any video recorded using the screen recording option is saved only to the app, and it won’t appear in the Photos app without exporting it. Screenshots appear in both the Photos app and the Backbone app.

The app contains “Top Highlights,” which are portions of videos uploaded by Backbone players. It is unknown how these videos are chosen, but any video saved to the highlights portion of the app becomes public and is viewable via a link.

I recorded this video of “Sky: Children of Light” using the Backbone highlights feature. 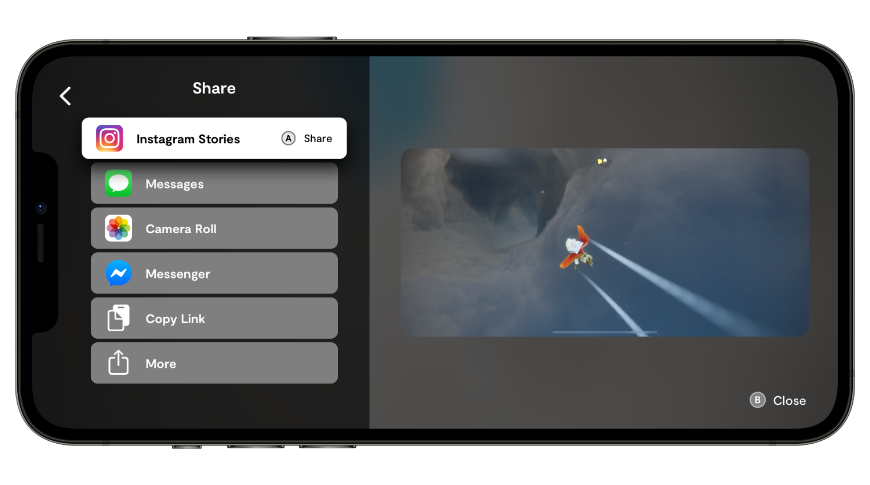 Sharing highlights is easy, though lacks any privacy notices

Due to the nature of screen recording on iOS, any data shown on the screen is saved to the video. This includes notifications, so if you are recording and receive a message, it will show up in the video.

Be aware of this when saving highlights to your Backbone app. The app does not have any language suggesting the clips are public on the Backbone server, though the videos are obscured behind a specific URL.

The app suggests games to play with a controller based on what other Backbone players are playing. The games range from “Call of Duty Mobile” to Apple Arcade titles.

To add a game to the Backbone app, you need to press the Backbone button while playing a game that works with controllers.

Using the Backbone One

Despite the social account issues and strange decisions in the Backbone app, the controller itself is amazing. The iPhone slides into place without effort, and you’re playing a game in seconds.

The buttons are responsive and easy to reach. The size and feel are similar to a Nintendo Switch “Joycon” controller. The joysticks are clickable, which was a controller feature added in iOS 12.1.

The Backbone One doesn’t fold up for storage, so it requires some dedicated space when traveling. That being said, it takes up less physical space than a standard Playstation or Xbox controller.

Playing games and using the Backbone app to switch between them is seamless. The other app features are unnecessary unless you have a group of people with this specific controller.

Since the controller attaches to the iPhone, it does get in the way when you need to do something like make a call or send a text. If you need to use an app that is usable in vertical orientation only, you’ll likely need to remove the phone first.

This is not a deal-breaker but a minor inconvenience given the form factor of the controller.

Should you buy the Backbone One? 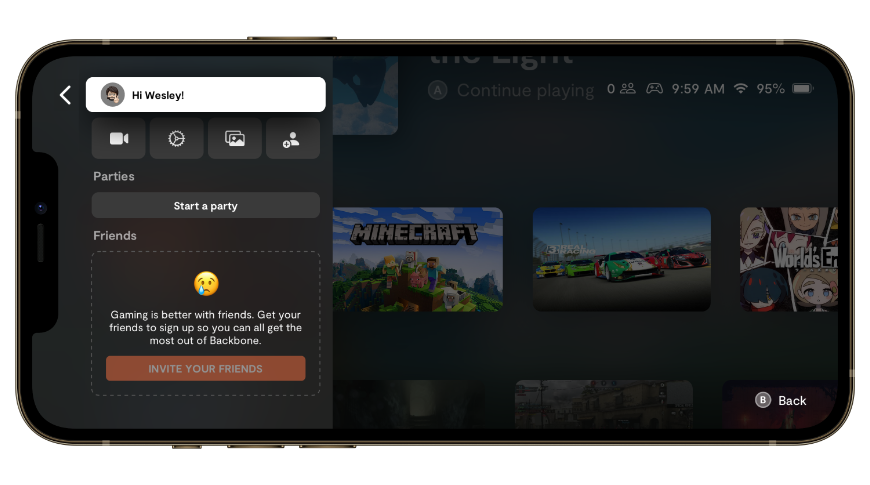 Backbone has something special here and should focus on the gaming aspects of the controller and app. The social account and sharing options in the app sour this experience only slightly and could easily be remedied by adding Game Center support to the app and removing the hardware requirement for app use.

Ignoring those shortcomings, the controller is well made, and playing games with it is fun. However, you’re paying for the full experience, so the app and its issues should be considered when purchasing.

Where to buy the Backbone One

How to use Quick Notes in iPadOS 15