Nikon has launched the Z7 and Z6 in India, which are the company’s debut attempts at full-frame mirrorless cameras. The new models are based on the all new Z-mount, and Nikon has a brand new set of Nikkor lenses to complement them. Gadgets 360 was present at the India launch event, after which we managed to snag some hands-on time with the new models.

The Nikon Z7 and Z6 have identical bodies and button placements, so the weight and ergonomics are exactly alike. Both use a magnesium alloy frame and weather-resistant flaps for the ports, and feel great to hold. The Z series is modelled after Nikon’s flagship D850 camera, and that design language is very evident. These new models have a rugged quality to them, compared to the slightly more svelte design of Canon’s EOS R or even Sony’s A7 series. The hand-grip is satisfyingly chunky, which is always nice to have. The buttons and dials also look very familiar, which would make the transition from DSLR to mirrorless relatively easy for existing Nikon users.

Users who aren’t familiar with high-end DSLRs, though, might find the sheer number of buttons a bit intimidating at first. Nikon has tried to squeeze a button or a dial into pretty much every little bit of space it could find, including two customisable function (Fn) buttons just next to the lens, facing forward. There’s only a single memory card slot on the right of both cameras, and it’s of the XQD type. XQD cards typically offer far superior read and write performance compared to SD cards, but they are quite expensive. If you look online, a 64GB XQD card costs roughly Rs. 8,000. Then again, if you’re going to be buying either of these cameras, chances are you already have a big budget. 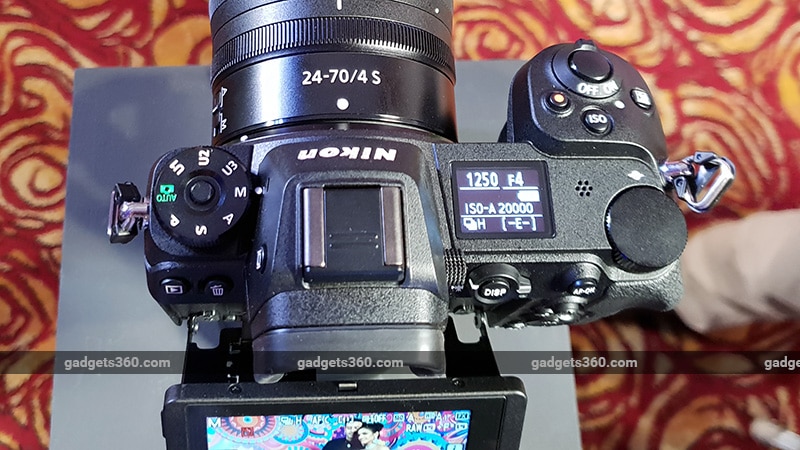 The Nikon Z7 (above) and Z6 have a very familiar button layout, similar to existing Nikon DSLRs

As similar as Nikon’s two new cameras might look from the outside, they have some pretty clear differences on the inside. The key differences lie in the sensor resolutions, number of autofocus points, ISO ranges, and burst shooting capabilities. The Nikon Z6 will find a following with videographers, although not as much with vloggers, as its LCD only tilts up and down and cannot be flipped all the way around. 24.5 megapixels should be plenty for most use cases, but the really impressive feature of the Z6 is its 100-51,200 ISO range. Burst shooting is pretty good too, topping out at 12fps, and you get a decent 273 PDAF points.

The Nikon Z7 on the other hand will appeal to photographers looking for a high-resolution sensor. The huge 45.7-megapixel CMOS sensor should allow plenty of headroom for cropping, even when printing large-scale photographs. The Z7 also has 493 autofocus points, which is a lot more than the Z6. Understandably, it has a slower burst rate of 9fps, and a narrower ISO range of 64-25,600.

Both cameras have high quality EVFs and LCD screens,and we didn’t notice much delay in switching between the two. The LCDs support touch input for setting the focus point, previewing images, and changing settings. Another feature that many will appreciate is the presence of 5-axis in-body stabilisation, which is missing from Canon’s EOS R. This should allow for better stability when shooting in low light, and with Nikon lenses that lack stabilisation. Both the Z6 and the Z7 can shoot 4K video at up to 30fps without any cropping, and 1080p video at 120fps. Shifting focus was smooth when we tried it on both models, and the joysticks they have at the back help with precise focus point adjustment. Focusing seemed quick too. 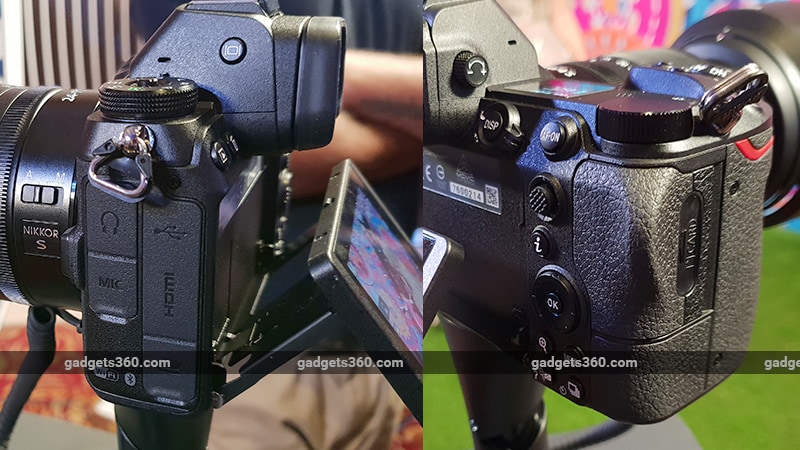 Both cameras have a good selection of ports and buttons, including a AF joystick (Nikon Z7 pictured above)

At launch, Nikon is bringing in three lenses — a 24-70mm f/4, a 35mm f/1.8 prime, and a 50mm f/1.8 prime. At the same launch event, Nikon also shared its lens roadmap for the next three years. The most hotly anticipated one is undoubtedly the Nikkor Z 58mm f/0.95 S Noct, which Nikon says its the best in the lineup (and which will most likely be one of the most expensive too). If you don’t feel like spending a lot of money, you can buy an FTZ mount adapter, which will let you use most existing F series lenses with the Nikon Z6 and Z7.

Unfortunately we’re unable to share any samples shot with these cameras right now since we couldn’t take them outdoors, and none of the demo units at the launch event had XQD cards in them. However, we should be getting our review units soon so we’ll be giving them thorough tests in multiple conditions.

The Nikon Z7 will hit the market this week, starting at Rs. 2,69,950 for just the body, which incidentally is similar to the price of Sony’s resolution-focused camera, the A7R III. Various lens and mount adapter bundles are also available, which will push the price higher, and let’s not forget the fairly expensive XQD cards too. We think that the Nikon Z6 will appeal more to users looking to buy their first full-frame mirrorless camera, as the body-only price of Rs. 1,69,950 is more approachable. However, this model will only begin shipping around November, so you’ll have to wait a bit .