Canon EOS R5 has been launched as the company’s anticipated flagship mirrorless camera. The new model, which has debuted after months of being in teasers, features an all-new 45-megapixel full-frame CMOS sensor. In addition to the EOS R5, Canon has brought the EOS R6 as its new mirrorless camera to take on the Nikon Z6, Panasonic S1, and Sony A7 III. The new model comes with a 20.1-megapixel sensor, which is the same that was available on the EOS-1DX Mark III. Both new Canon cameras are powered by the Digic X image processor and in-body image stabiliser.

The Canon EOS R5 is primarily designed for people who’re looking for a top-notch mirrorless camera with up to 8K video recording support. The camera has the 45-megapixel sensor that’s touted to deliver better dynamic range over what you would get on the EOS R. There is also support for continuous shooting at up to 12fps using the mechanical shutter or 20fps with the electronic shutter. Under the hood, there is the Canon’s Digic X image processor that supports an ISO range of 100-51,200, which is expandable to as high as ISO 102,400.

Canon has provided its next-generation Dual Pixel CMOS AF II autofocus technology that is an upgrade of the existing Dual Pixel CMOS AF. There is also a 100 percent autofocus coverage area. This means that you can focus at any part of the frame. The AF points on the EOS R5 has also been increased to 1,053 — seven times more than what’s there on the EOS R. Furthermore, there are 5,940 manually selectable AF positions.

The EOS R5 also has Face Tracking with Eye Detection AF, the proprietary technology that was first introduced on the EOS R and EOS RP. You’ll also get the ability to enable AF Priority mode for people as well as animals.

One of the key advantages of having the EOS R5 over the existing EOS-series mirrorless cameras is its in-body image stabilisation that is designed to work in conjunction with the optical image stabilisation (OIS) of the lens. It is effective up to 8-stops shutter speed and works with all EF and RF series lenses with IS or non-IS category.

The EOS R5 also lets you capture 8K videos at 30fps frame rate, with full sensor readout. You can also crop your 8K footage during post production for 4K delivery. Further, the camera lets you record 8K RAW movies internally, without requiring any accessories. There is also an option to record 4K videos at 120fps. Also, you’ll be provided with file format options including RAW, H.265 HEVC, and H.264 MP4 in either ALL-I or IPB compression.

On the connectivity front, the EOS R5 has dual-band Wi-Fi as well as Bluetooth v5.0 along with Bluetooth Low Energy support. There are also USB Type-C and HDMI micro ports as well as a 3.5mm headphone connectivity. The camera also includes support for FTP and FTPS to let you transfer your image data even through an FTP server directly. Moreover, Canon has also provided its cloud storage access that lets you store your content on a virtual space for up to 30 days, with no limit in size.

The camera has a vari-angle LCD monitor with touch support and a top LCD panel for quick controls. There are also Multi-controller and Quick Control Dial. Additionally, you’ll get dual memory card slots that can include a CFexpress card as well as an SD card. The camera with its magnesium alloy body has dust- and water-resistant design and weighs 738 grams with the battery and an SD card.

The Canon EOS R6 has some similarities with the EOS R5. However, it doesn’t have the premium 45-megapixel sensor but the 20.1-megapixel full frame CMOS sensor. There is also 4K video recording support at up to 60fps over 8K offering available on the EOS R5. Nevertheless, you’ll get the same Digic X processor, Dual Pixel CMOS AF II autofocus technology, and in-body image stabilisation. The camera also includes dual card slots that both accommodate SD memory cards. 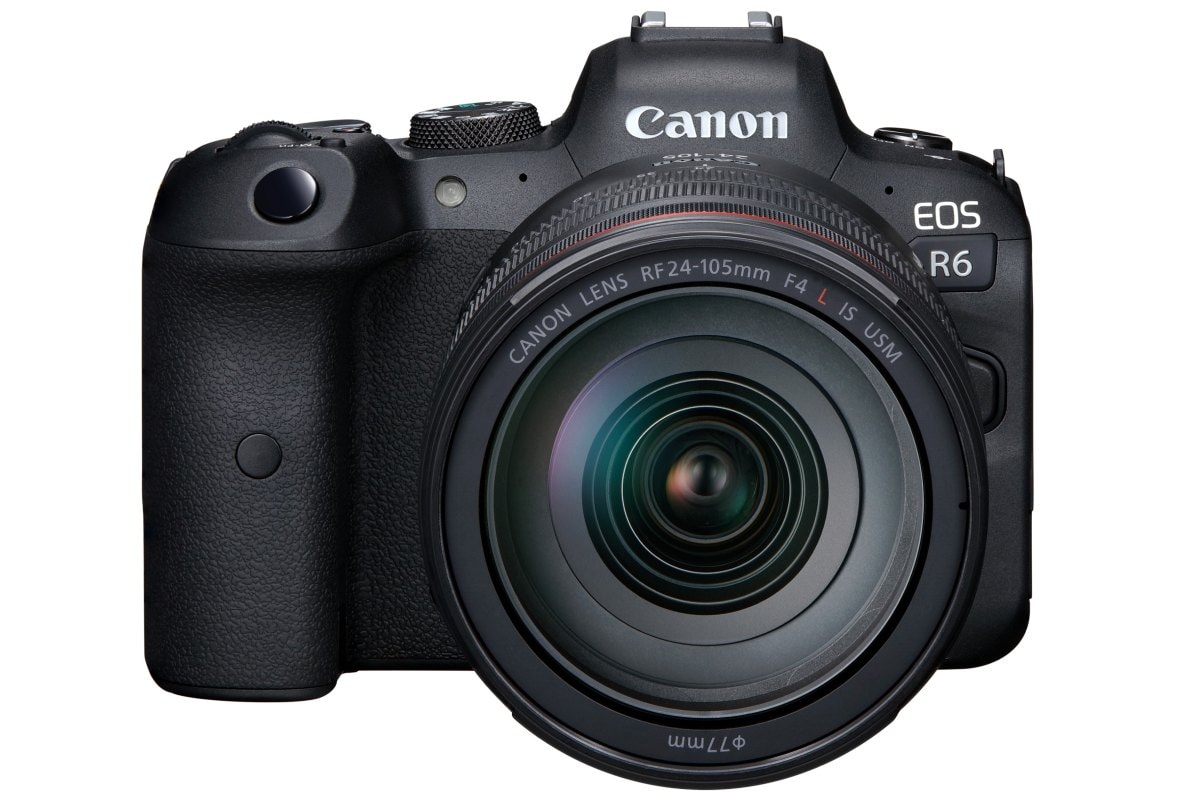 You’ll get an ISO range from 100-102,400, which is expandable further to ISO 204,800. There is the same burst shooting support that’s available on the EOS R5. This means that you can continuously shoot at up to 12fps using the mechanical shutter or 20fps with the electronic shutter. The camera has 6,072 manually selectable AF positions and includes features such as face and eye detection as well as the newly added “head detection” support. You’ll also get the new animal detection mode to deliver enhanced focus results for shots that feature animals.

The EOS R6 can work on 10-bit video using Canon’s C-Log mode. There is also an HDR PQ mode that lets you view your high dynamic range videos directly on HDR TVs.

Canon has provided a vari-angle LCD monitor on the EOS R6 that supports touch inputs. Also, there is a mode dial on top — in addition to the Multi-controller and Quick Control Dial.

The built-in connectivity options of the EOS R6 are similar to what you’ll get on the EOS R5. You’ll, thus, get USB Type-C, HDMI micro ports as well as Bluetooth v4.2 with BLE support and Wi-Fi 802.11 b/g/n. The camera comes in a polycarbonate body that weighs 680 grams (including its battery pack and an SD card).

Which is the bestselling Vivo smartphone in India? Why has Vivo not been making premium phones? We interviewed Vivo’s director of brand strategy Nipun Marya to find out, and to talk about the company’s strategy in India going forward. We discussed this on Orbital, our weekly technology podcast, which you can subscribe to via Apple Podcasts or RSS, download the episode, or just hit the play button below.